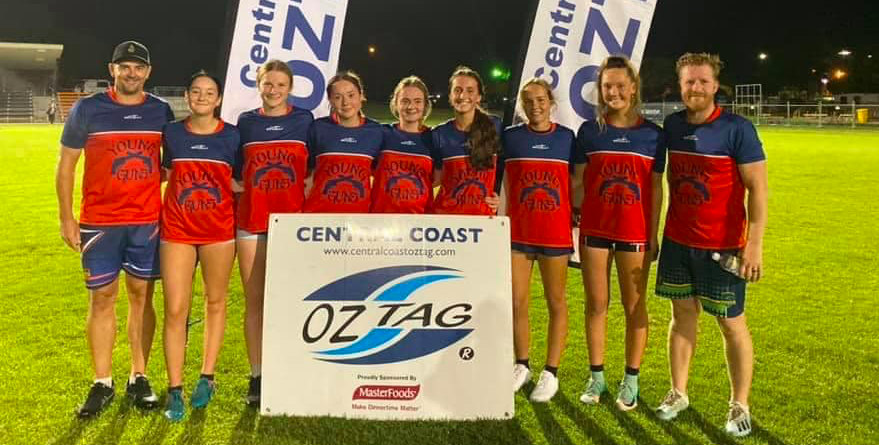 DAY PLAYED: Tuesday from 4pm and Seniors from 6pm

Central Coast Oztag are awaiting NSW Health orders as to the recommencement of community sport. At this stage we think it may be November but there’s is a chance the start date could be as far away as January.

In saying that, were asking for team nominations only, except in the case where you are paying using an Active Kids Voucher (AKV).

Please scroll down further with information on how to enter your team.

If you are paying using an AKV, please obtain the unique team code from your Team Delegate. You must then submit your registration using the AKV before December 31 to use your 2021 AKV. You will not be able to redeem your 2021 AKV after the 31st December however if competitions do not go ahead you voucher will roll over to the next season in 2022.

Registration is $100 for junior players and $110 for Mixed 20s and Senior players plus online fees.

“Mixed” junior divisions can be any combination of all males, all females or a mixture of both.

6s and 8s divisions – All players will receive only one point per try.

To be eligible to trial for Junior State Cup or Nationals, you must be registered in a 2021/22 Junior competition.

All players (including Mixed 20s) must be 15 to take the field in a senior competition.

Mixed opens divisions must have a minimum of four females on the field at once.

Men’s Open / Ladies Open are not limited by the amount of Rep players per team.

To be eligible to trial for Senior State Cup or Nationals, you must be registered in a 2021/22 Senior competition.

20s Mixed and Seniors – Must be 15 years of age prior to taking the field.

Players are eligible to play up one age division only e.g. a player that qualifies for the 12s age group can only play up 1 division to the 14s age group (they must also be registered in that team to play).

Individual players cannot ‘play up’ a grade. They must stay in their eligible age division.

MINIMUM OF 10 PLAYERS PER TEAM

In order to register a team, you must have a minimum of ten players. There is no maximum number of players, however Central Coast Oztag suggest having no more than twelve players. This allows each player to get enough game time.

**In the current climate with COVID we are accepting Team nominations only without having to show 10 players. Players using an AKV only need to register at this time. Central Coast Oztag will contact team delegates when it’s time for ALL players that are not using AKV’s to register**

Teams must all be in matching ‘numbered’ shirts by Round 4.

6s, 8s and 10s age groups do not have to have numbered shirts, but they still need to be matching colour and style.

A penalty of 1 try per player out of uniform, will be awarded to the opposing team prior to starting the game. The referee will make a note of this and make both teams will be informed before play starts.

Players are required to wear official Australian Oztag shorts or tights. Under no circumstances are players allowed to sew Velcro patches onto pants/tights or wear LEAGUE TAG shorts/tights.

Shorts ($30) & Tights ($35) can be purchased at registration days & all the playing venues over the first couple of weeks.

All teams are required to sign on each week prior to taking the field. If players fail to sign on, points may be deducted.

A forfeit may be awarded to the opposing team when a team has less than 5 players signed on. If you are not signed on, you are not insured. With COVID restrictions and public health orders, new sign on requirements will be sent to each team delegate.

Any teams who are not able to field 8 players, are permitted to find a ‘back up’ player.

Players who ‘back up’ must inform the admin staff before taking the field. Any team fielding a ‘back up’ player that has not informed competition staff before the start of the game will incur a forfeit (5-0 loss).

Admin staff will give the ‘back up’ player a sticker which will need to be given to the referee before taking the field. Teams are not permitted to have ‘back up’ player/s in order to create substitutes for the team.

Any one team can only have a maximum of five ‘back up’ players throughout the season.

Any ‘back up’ player can only back up a maximum of three times. Random checks will be done throughout the season.

If you think your opposition is breaching the rules and playing unregistered players, please notify competition staff during or before the game. Teams can also see registered players from all teams on the Fixi app.

If you wish to register as an individual player please TEXT players first and last name, email, DOB and Competition venue to 0477928866.

How many players do you need if you want to put a team into the competition?

You will need a minimum of 10 players to register a team there is no limit to how many numbers you can have in a team however Central Coast Oztag recommend 10-12 players to give everybody plenty of game time.

Can I play if I don’t have a full team?

Yes if you wish to enter as an individual player please text players name, email, DOB and Competition venue to 0477928866

We have 5-6 players but not 10, can they sign up as individuals and be in the same team?

Central Coast Oztag will try their best in this situation to place players in the same team, though when signing up as Individual players this can not always be guaranteed depending on the number of individual players signing up.

My son/daughter doesn’t start kindergarten until next year, can he/she still play?

Unfortunately they can not play in our regular competitions, though can join our Tiny Taggers program by calling Bree on 0422 859 468 or looking on our Tiny Taggers Facebook page aimed for pre-school aged children.

My team doesn’t have eight players for some games, can we still play?

Yes, you can play with as little as five players. Though there is the opportunity for players to ‘Back Up’ if needed, please read these rules carefully.

Our team’s jerseys are all the same colour but different designs/brands on them, is this okay?

No, all teams must have matching and numbered jerseys by round 4. The only exceptions are in the 6s, 8s and 10s in which they do not require a number (however must all be matching) as well as the individual teams in which they are required to be wearing the correct team colour.

Our son/daughter has League Tag shorts/tights, why can they not wear them?

Unfortunately due to the difference in the make of these, they are not covered by our insurance policy.

Will teams be regraded if their games are too hard/easy?

Grades are continually monitored by our Competition Managers, if you feel your team is in the wrong division, we encourage you to have a conversation with them as soon as possible. Most regrading will take place by the conclusion of Round 3.

When do teams train?

As Oztag is a recreational sport there are no trainings, however if the teams wish to organise their own training they can, though must ensure they comply with Council regulations with field bookings.

Do we have a coach?

Teams are not required to have coaches, only a team delegate is to organise communication to their relevant teams. With our individual teams however Central Coast Oztag will allocate a representative to help out on the field with the younger age groups for the first three weeks to help learn the rules/manage the team. In the first week we approach parents to see if someone is able to put their hand up to be the coach/team delegate.

Are parents allowed on the field to help?

Yes, a Team Delegate or Parent is allowed on the field with the players in the 6s and 8s. It is important that the coach understands they are out there for the sole purpose of the team and are not to challenge any refereeing calls or interfere with the game at any point.

Can my son/daughter play up in a higher division with their sibling?

Players can only play one age group above and can only do so if they are joining with a whole team, e.g. a player eligible for our 10s can play in the 12s with their sibling but can not play in the 14s.

Note: Individual players joining must play in their own age division and cannot play up an age unless agreed from Competition Manager.

Who do I advise if my son/daughter or I can not make the game?

You must advise your team delegate as soon as possible, you do not need to contact Central Coast Oztag directly.

How many points are given for girls scoring in mixed divisions?

2 points are given per try from ages from 10 and up. In ages 6s and 8s, only one point is given. In Senior mixed and 20s mixed teams all girls are given 2 points.

Where can I find the draws each week?

How many weeks does the competition go for?

Competitions go for twelve weeks including Semi and Finals. All teams have the opportunity to play for the twelve rounds, even those teams that did not make finals.

What happens if when fields have been closed due to bad weather?

If you have siblings that play is it cheaper?

If you have four children from the one immediate family, then the fourth child is free. Please note this does not include parents/guardians playing or if using active kids vouchers.

Where can I buy shorts/tights?

Shorts and tights will be sold at each competition venue $30 shorts $35 tights and is cash only.

HOW TO REGISTER A TEAM USING SPORTFIX

This is for whole team registrations of 10 or more players.

If you do not have a team and wish to register as an individual player you will need to TEXT players first and last name, email, DOB and Competition venue to 0477928866.

THERE ARE LIMITED PLACES AVAILABLE – TEAMS WILL BE ALLOCATED INTO THE COMPETITION ONCE ALL PLAYERS HAVE REGISTERED AND MADE PAYMENT. TEAMS PLACE WILL NOT BE HELD UNTIL ALL PAYMENTS ARE FINALISED. PLEASE DO NOT REGISTER UNTIL ALL PLAYERS ARE IN A POSITION TO REGISTER AND PAY.

Players added to a team by the delegate:

If you wish to register as an individual player please TEXT players first and last name, email, DOB and Competition venue to 0477928866.